Have you ever arrived at a destination you’ve never been to before and felt like you just landed on a new planet?

That was how I felt when I arrived in India only a matter of days ago… I have been to Asia before but this was that little bit stranger and more bizarre than what I experienced before and a very different culture. India is my first stop on a long list of places I am going to be visiting over the next two years and I think it was a great place to start, it feels like being thrown in the deep end! The sheer beauty and hustle and bustle of this place certainly keeps your head turning with so much to take in. I am staying in Goa where around 40% of the population is Christian making it the highest percentage amongst the other states, this is a popular destination for tourist – more specifically I am staying In a lovely quaint town called Agonda in Canacona.

During my journey from the airport back to Agonda I was shocked to see the amount of dogs roaming the streets, each mile I would see another 5, 6, 10! Not only dogs but roaming pigs (not in that quantity!) goats, and I even saw an eagle fly over. Cows are a sacred animal here and because of that they roam free including up the highway, along the beach or through the high streets if they please! Whilst you are driving around on your scooter you may even find yourself slowing down to let a monkey cross the road, I have been here less than a week and already seen 2, which I don’t think is bad as we have not gone out of our way to find them! You have to be careful on the roads here as road laws do not seem to exist and the morals are more ‘see a gap take it’ and be sure to toot your horn at every opportunity you get and you will fit right in! 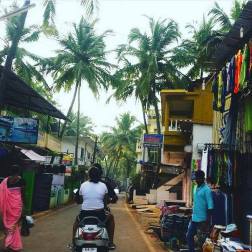 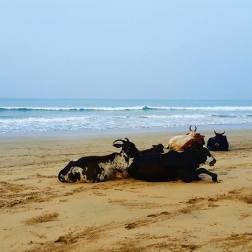 On the way to Goa the plane stopped in Mumbai for a change over, as we came in for landing I got a glimpse of the slums that surround the newly extended and improved airport, stuck between that and the city it’s hard to see the segregation between classes which doesn’t officially exist anymore but in reality very much does!

I am staying in an apartment down the road from Agonda high street, across the road from us there is an animal clinic where they take in cats and dogs from the street that may have been badly treated or injured, medically assist them, give them their vaccinations and most importantly neuter the animals clipping the top of the ears which is a universal sign that this has been done. Volunteers are welcome to help out with socializing with the animals bettering their chances of being re – homed, this is something me and my friend Zoe are doing during our time here. If the animals become familiar with human interaction and are domesticated they are more likely to find a forever home, so interacting with them from a young age is very important. 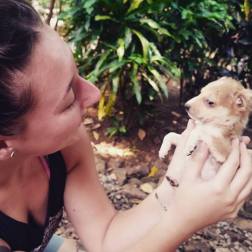 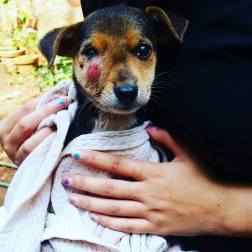 Agonda high street is not what I expected, it is a small dirt road that runs down the centre with a number of different restaurants, beach huts, travel agents, merchandise/convenient stores, pharmacies and other bits and pieces! Most places are small shacks with no flooring only the natural earth beneath your feet either dirt or sand and everything seems rather basic, I had to try to remember it is respectful to remove your shoes before entering someone’s shop or house to avoid trailing in dirt . There is something really traditional about the minimal luxury’s that help you embrace the culture. The people are welcoming and friendly with good service and most places will have wifi. The beach runs along the back of most restaurants giving you a lovely beach view and if you time it right a stunning sunset, though we haven’t been too lucky yet as regardless of the humidity it has been quite over cast and hazy so far as Goa escapes its monsoon season. There is also some quirky ‘Chill out’ area’s in some of the beach restaurants where you take your shoes off and can sit on cushions in these small booths with lanterns and canopy’s. Every morning we have been walking the length of the beach, around 3 miles for a very pleasant morning stroll! 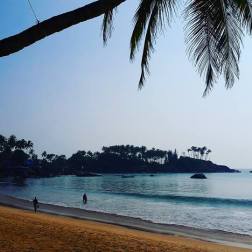 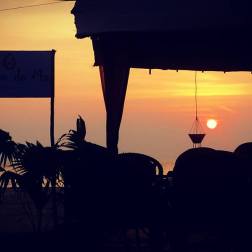 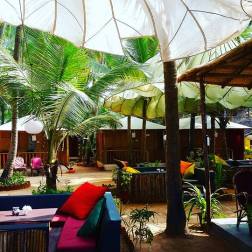 I experienced the markets over in Chaudi which was interesting to see! At the fruit and veg market people were sitting on the floor selling a huge variety of herbs, spices and of course fruit and veg – we brought the freshest corn their I have ever tasted! Top tip – to avoid ants invading all your cupboards where you are staying, lay cinnamon sticks around your kitchen which will prevent ants from getting in all your food! The market is a great place to buy some cinnamon.

Across from the fruit and veg was the fish market which didn’t smell so nice but there was anything from huge red and grey snappers, silver backs, shark, sardines, octopus and much more! Behind the fish market we walked through into the meat market which was very upsetting to see! This was the day I decided to become vegetarian, it was something I had been considering for a while but this was enough for me to finalise my decision. Live chickens where kept in dozens cramped into a small enclosed corner where people could choose their livestock, they were handled extremely poorly! Picked up by their wings and held upside down whilst people queued to have them weighed and then slaughtered in front of the other chickens causing them a lot of unnecessary stress up until their time was also up! Most the chickens had feathers missing which is also a sign of stress and I personally found this very difficult to watch. The Indians seem to be very tough people, brought up in poverty and with a hard upbringing they do not treat animals with the same respects we might coming from a western society. Meat is expensive and also a treat to have as a meal therefor the animal is only seen as food, I have struggled to come to terms with this way of life which has been enough for me to take meat away from my diet. I could not possibly understand the struggles these people face and do not judge their culture at all but it does not seem justifiable that an animal can be put through the trauma it receives before it becomes dinner, for me it is not about the fact people eat meat it is about the care of the animal before it is slaughtered. 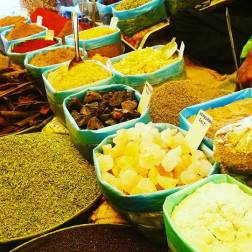 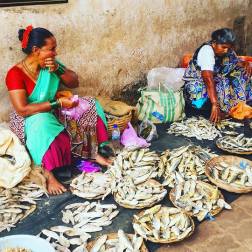 There is a rage of vegatarian options here, a lot more than you would find back in the UK and also I have found there is a lot of dishes which are not too spicy! I struggle with very hot foods and was concerned before arriving, for people who may be concerned about the same thing… it really is not that bad and the food is delicious! Plenty of choices and fresh ingrediants.

Recently the country is under going a money crisis as the Indian Priminister has taken the 1000 and 500 rupee out of the circulation in an effort to try to stop illegal money on the black market, so people who have been hoarding money untaxed have to take it to the bank before the effects take place after the 31st December. I have seen ques and ques of people standing outside the banks in the sweltering heat to do this this! They are now introducing a 2000 rupee and will eventually be introducing new 500 and 1000 rupees the distinguise the difference betwen the black money and new currency. The people have taken to this new law very well considering the change happened over night and if this was to happen in the UK there would be riots and all sorts! I really respect the way the locals have adapted and dealt with this difficult matter right at the beginning of tourist season as well! I mean it would have been a lot more convenient to make these changes during monsoon period. The only inconvenience for tourist during this time is the money has been so difficult to come across with the ATM’S being empty and the queue’s at the bank swarming, let alone the UK charges for withdrawals. Also a lot of places have been refusing to take the 500 rupee so they can avoid the queues at the bank however this is still legal tender until the end of the month… its just whether its worth the fight to get people to still accept these.

Agonda is a really lovely spot of the south of Goa a lot quitter than the North which is known more as party central and also a hot spot for the Russian tourists! There are some lovely beaches to visit near where I am staying such as Cola beach which is a nightmare drive to get to with a very uneven dirt road trailing to this hidden treasure and lovely resort. Also Palolem Beach which is where a lot of the tourists go and they hold a silent disco on the beach on a Friday night! Galgibag is a bit further out, around an hours drive but if you love fresh crab this is the place to get it and the drive is very pleasant along the way where there is lots more to see! 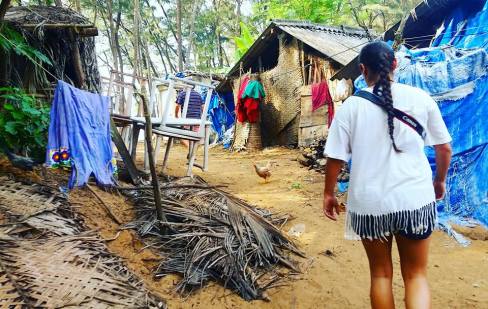 To view my other posts simply click on ‘International Smile’ in the header!